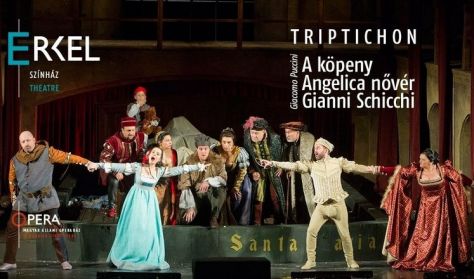 Three one-acts. Three masterpieces. Il trittico was Puccini's penultimate work. Conceived during World War One, it appeared around the end of a long period of dormancy for the maestro, and was followed only by the unfinished Turandot, after yet another long hiatus, one lasting eight years.

Three separate operas, which are not organically linked to one another: Il tabarro tells the tale of a love triangle set in the oppressive atmosphere of a boat rocking along the banks of the Seine. Set at Easter time, Suor Angelica relates a tragedy unfolding at a convent, while the comic Gianni Schicchi was inspired by a mediaeval Florentine whose sly means of enriching himself were described by Dante himself in The Inferno. Three fantastic pieces directed by Ferenc Anger, with a magnificent cast.