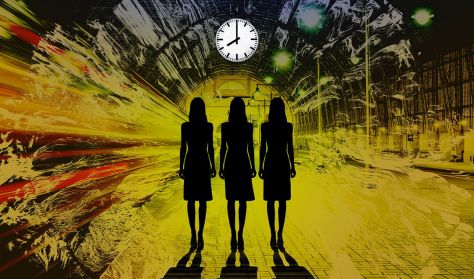 Opera in three acts, with prologue and epilogue, in French, with Hungarian and English surtitles

What makes the stories of E. T. A. Hoffmann so memorable is the spectacular combination of an unbridled imagination and actual social situations. In his unfinished final work, Offenbach departs from the style of his hilariously satirical operettas, which are full of the witty and mocking social criticism of his era. Naturally, this work is not devoid of humour either, but the poet’s romantic adventures are dominated by dark, sometimes fateful, chromatic nuances. Accompanying Hoffmann throughout his search for the absolute ideal of femininity and bringing him misery are four wicked characters, forcing him to constantly confront death even in his state of amorous intoxication. With these stories constituted of both the real world and a hair-raising imaginary one, the composer leads his listeners into a universe where the border between dreams and reality is easily blurred.

Prologue
The versatile artist Hoffmann – a writer, poet and musician – is obsessed with his passion for the opera star Stella, who is just now appearing in Mozart’s Don Giovanni. At the interval, however, a lovers’ quarrel between the two prompts him to leave the performance in order to go drink himself blind. The Muse sees this as an opportune moment to rid herself of her rival, as Stella has been using her power of attraction to entice Hoffmann away from her – meaning away from his own creative endeavours. In order to achieve her aim, she takes on the guise of Hoffmann’s old friend Nicklausse. Stella sends a placating letter to Hoffmann: the envelope contains the key to her dressing room and the message that she will be waiting for him after the show. The wealthy and influential counsellor Lindorf, who wants Stella for himself, intercepts the letter with the plan of letting Stella find Hoffman drunk later on and then abandon him permanently in disgust. Hoffmann’s friends come after the poet to find him. Luther, the barman, announces that the performance is about to continue next door, but instead of returning to watch, they start to drink. Asked to entertain them, Hoffmann relates the story of his three loves, in which a figure reminiscent of Lindorf is always present to thwart his happiness.
Olympia
Hoffmann’s first love is Olympia – an automaton invented by the scientist Spalanzani and a marvel to behold for the curious visitors drawn to see it. The eyes of this doll exhibiting a perfect appearance and perfect behaviour were the work of another inventor: Coppélius. He also sells Hoffmann a pair of spectacles that completely deprive the poet of his sense of reality. Spalanzani and Coppélius argue over ownership of the doll – and the revenue that it generates. Spalanzani promises Coppélius a greater sum if he surrenders the rights to the doll. Coppélius, for his part, advises him to have Olympia wed Hoffmann, who has not yet noticed that it is an automaton he is in love with. The guests arrive for the demonstration and watch Olympia dance and sing. Hoffmann waltzes with her, but when Olympia “overheats”, he falls to the ground and breaks his spectacles. Returning for vengeance after finding out that the promised money did not actually exist, Coppélius smashes the doll into bits. Now Hoffmann too realizes that Olympia was a machine: he has simultaneously lost his love and become an object of ridicule.
Antonia
Antonia is a talented young girl whose greatest desire is to become a singer. However, her father, Crespel, forbids her to sing, as well as to see her beloved Hoffmann. The reason for the former objection is because Antonia’s mother died from singing when her own voice overloaded her system – and she has passed on both her talent and her illness to her daughter. Doctor Miracle arrives and, against Crespel’s will, examines Antonia. Listening in on their conversation, Hoffmann learns about Antonia’s ailment. He makes the girl promise to give up her career and never sing again. Although Antonia is willing to both comply with this request and to marry Hoffmann, Miracle summons the girl’s dead mother to discourage her from letting her talent go to waste. Antonia sings a final song and dies in Hoffmann’s arms.
Giulietta
Seemingly disillusioned with romantic love, Hoffmann falls under the spell of the prostitute Giulietta, who entertains men under the direction of Schlemil. Dapertutto – a diabolical figure intent on acquiring people’s souls – has (with Giulietta’s help) already obtained Schlemil’s shadow and is now angling for Hoffmann’s reflection. Giuletta tricks Hoffmann into believing that she is in love with him, which instantly wins him over to her. Warning the poet that Schlemil will kill him if he find out about their relationship, she urges him to flee, but to first leave his reflection locked in a mirror until Giuletta comes after him. Hoffmann consents, rejecting Nicklausse’s suggestion that they escape while they still can. He attempts to obtain from Schlemil the key to Giulietta’s room so that he can take her with him. Schlemil attacks him, but Hoffman slays him with a weapon provided to him by Dapertutto. Taking the key, he then rushes to Giulietta, only to find it empty: the prostitute has played everyone for a fool and run off with Schlemil’s servant Pittichinaccio.
Epilogue
As Hoffmann’s three stories come to an end, so does the opera performance in the theatre. Nicklausse and the others understand that the three women are actually three aspects of Stella. The Muse exults: the poet has been reborn by renouncing love, and Stella departs – instead of with the drunken Hoffmann – with Lindorf.

Opera in three acts, in Italian with Hungarian and English surtitles

Scenic cantata, in the original languages, with Hungarian and English surtitles

Rock-opera production in Hungarian, with Hungarian and English surtitles